You know what it’s like.  You walk into a company for a meeting and something feels off. The receptionist is rude, staff seem flustered and the place is a mess.  When you meet your client or colleague, you feel an almost palpable detachment and annoyance towards the organisation.

When you walk away, you feel relieved you don’t work there and surmise that the culture must be bad.

Your feeling is actually correct.

Culture is about how gets work done in an organisation.  It’s about the behaviour and habits employees have learnt over time, through modelling their peers.

That’s why many people report that they can tell, anecdotally, if a workplace has a great culture, just by walking inside reception and watching employees.  According to social psychology, we can be very accurate with our quick behavioural judgement and they even have a term for it known as a “thin slice of life.”

Monitoring workplace behaviours is so important because they form a unique company culture.  Habits and behaviours indicate how workplaces function because evolution has taught us that it is beneficial to live in tribes, where we can share out the work of daily survival.

Humans want to be part of a group that accepts them and that seems to be going somewhere.  Being part of a group is important to mental health.  We quickly model group behaviour in a workplace, so that we fit in and become accepted.

Introducing one toxic person to the mix can be devastating to a high functioning culture. It’s because employees will model their behaviours (over time).  While those that can evaluate the bad behaviours will feel disappointed when these behaviours appear to be rewarded.  If left for too long, the culture can stop functioning effectively and employees start arguing, don’t collaborate and start taking more ‘sickies’.  It can take years to mend.

Here are five indicators of a poor culture (confirmed by research various studies) that signify toxic behaviours are becoming rampant and that employees have fallen into despondency.

In the book, The Tipping Point by Malcolm Gladwell, he mentioned how New York’s crime scene in the 1980’s was effectively cleaned up by removing graffiti.  It was fixed by a belief that when there is any sign that there is a lack of care or no one in charge, it sends a message that there is a collapse of the system.  All it takes is one broken window, for bad behaviours to take hold.

Untidy kitchens, messy offices and hallways are a big indicator of an unhealthy culture. In fact, really messy kitchens show a total disrespect to fellow employees.

Interestingly, they also indicate a poor safety record. You’ll find that safety auditors can accurately tell the safety record of a site office, just by seeing how tidy the kitchen is or even the state of a factory.

A couple of years ago I went to visit a client of mine that had moved to a mid-sized manufacturing company.  On arrival, I accidentally walked into the factory (mistaking it for the reception).  I was quite appalled at the condition.  It was dusty and dirty, equipment was all over the place and so were the staff.  Part of my shock was that I knew how passionately my client had been about safety when he was the CEO of a larger international company.  When we met, I had to ask in our meeting “How’s your safety record?”

He confided, quite frustratedly, that he was appalled by it, especially the messy, unsafe workplace.

Fast forward six months and he’d completely overhauled safety –  injuries had dropped remarkably and they were more productive and profitable.  All by focusing on tidying the workplace.  Now the place is spotless and employees truly believe that management care about their safety.

Tidy workplaces are a healthy indicator of a company that cares for its staff and premises. They also send a subtle message that poor behaviour isn’t tolerated.

In the book, Drive, by Daniel Pink, he mentioned that former US labor secretary Robert B. Reich had developed a simple diagnostic tool to assess the health of any company.  When Reich talked to employees, he listened carefully for the pronouns they used.  Did staff refer to their company as “we” or “they”?

“They” suggests disengagement and at its worst, alienation.  While “we” suggests that employees feel as of they are part of something meaningful and significant.  They’re engaged.

At a large manufacturing company I worked for, I was stunned when factory floor workers were constantly talking about “them,” even when they spoke about their supervisors.  The criticism was pretty intense.  Three weeks later they were all on strike.

Listening to the language of staff (including whether they have their own terms and language), as well as watching their body language provides vital clues for culture.

Another visual test, particularly if the organisation has had a merger, gone through bad press or had a bad safety accident, is to have a visual look at the car park.

This one is easier to do over time, but tracking it regularly or asking staff about the numbers gives you a feel for how the absenteeism rate, just by visually checking the number of cars in the car park.

When companies are experiencing a crisis, have high levels of bullying or even lack an inspiring vision, absenteeism is common.

Of course, if you do notice the number of cars have dropped, you’ll want to ask why, in case it’s quite innocent.  For example, one company I worked with always had an over-flowing car park.  One Friday morning I arrived, to find a car park (a big win for me). When I enquired, it was because of an offsite staff party.

Another important visual clue is how meetings are executed within organisations. Meetings reflect a company’s culture.

Signs to watch out for:

When people complain about all their meetings, you know that they are being managed poorly.  It’s also an interesting indicator of how employees act.

Once I was invited to a meeting with the marketing manager in a health organisation.  She had been slightly confusing over the phone about why she wanted me to see her, but as I had met her at a trade show I trusted that what we had discussed there was what she wanted to discuss further.  So I was a bit shocked, when eight different department heads were summoned when I turned up.  Each person came in with a sullen look on their face. After a few minutes, it became apparent they didn’t know what they were there for.  A large argument ensued with everyone questioning her on why she had wasted their time.  She took the easy route and blamed me.   That office has now been shutdown and the company has a low one star rating out of five on Glassdoor with employees complaining about a bullying culture.

Meetings need to be purposeful.  Time wasting shows a lack of an inspiring vision and poor leadership (and disrespect of other people’s time).  It also means poor strategy execution.

Okay, this one probably sounds a little bit corny.  But you really can evaluate a workplace culture by visually assessing people’s happiness levels.

The sound of laughter is always a good sign.  So is a friendly receptionist or helpful employees when you enter the grounds.  Oh, and also people who greet you in a warm manner during a meeting (and value your time).

You also really want to see people acting as if they know what they’re doing and appear super-focused on tasks, rather than gossiping or ignoring the phone (or each other).

The Importance of Group Identity

Successful companies and leaders never wax lyrical about their company’s products and services.  Instead, they always talk about their talented employees and high performance culture.

They know how their organisational culture operates which means they knows how to attract the right people to work together, feel the vision and understand the meaning behind their work.  A cohesive group of people who love working with their peers each day and know that what they are doing makes a difference.

Businesses that can build on this important human driver, to belong to a group and for each employee to have a strong sense of group identity, create a thriving organisation. 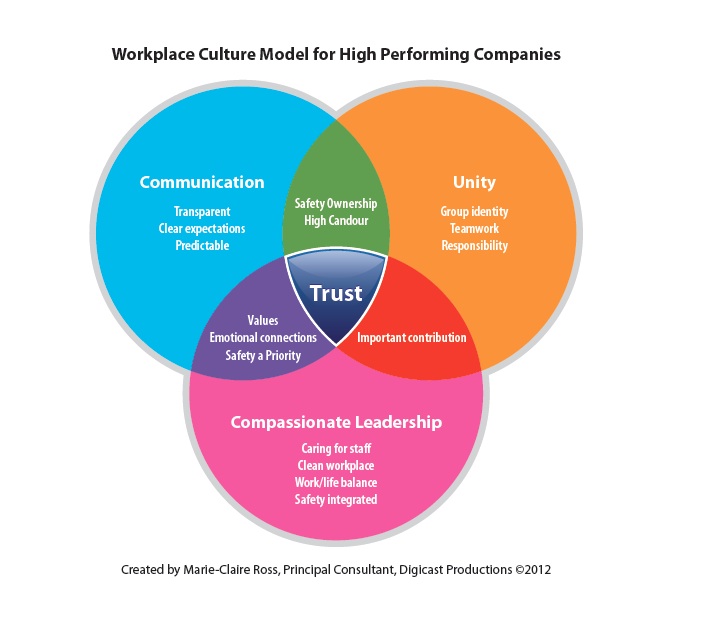 High performance companies integrate safety into every company decision.  This is because they realise that the safety of their staff is an important part of how...

The bigger an organisation becomes the more likely it is to fracture into fiefdoms and turf wars.  An important challenge for leaders is to create a strong, shared...