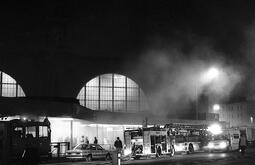 One November evening in 1987, commuters were busily rushing home from work on the London Underground.

This particular night saw the cavernous main hall of King's Cross overloaded with passengers rushing through to catch their trains.

Smoking was banned in the London Underground, due to a fire at Oxford Circus in 1984, but commuters eager to get their nicotine hit, would light up on the outgoing elevator.  On this particular evening, one commuter threw their match over the side of the elevator.  And unlike the majority of matches that burnt out on the fall down, this one ignited.

What then took place highlighted a lot of small cultural issues within the London Underground that on their own, were fairly insignificant, but when they occurred simultaneously caused a major catastrophe.  According to the book Outliers: The Story of Success by Malcolm Gladwell, when you assess any big industrial accident, there are always a series of errors that on their own don't cause any damage, but when they add up, the results can be disastrous.

King's Cross station is undoubtedly, a beautiful, majestic old Victorian English railway station that features a labyrinth of deep escalators and a sea of people rushing about.  Back in 1987, most of the internal structure of the elevators was made from wooden slats and rubber handrails that had been used in construction decades before.  Around 20 layers of paint had been used to repaint the ceiling, so that no-one could remember it's original colour.

According to The Power of Habit by Charles Duhigg, Phillip Brickell, a 43 year old ticket collector was notified of a burning tissue at the bottom of a nearby escalator by a concerned commuter.  Immediately, he rode the escalator down, found the smoking tissue, extinguished the flames and went back to his position.

Curiously, Brickell thought no more about the tissue and where it had come from.  He had no idea it had flown off a much larger fire that was burgeoning somewhere in the station.

He also did not tell other employees or call the fire department.

It could easily be assumed that Brickell was incompetent and not much of a thinker.  The truth was he was symptomatic of a much bigger problem within the London Underground that was the perfect breeding ground for a large scale safety accident.

Fifteen minutes later, a passenger told another Underground employee about a wisp of smoke as he rode up the Picadilly escalator.

This time Christopher Hayes, the safety inspector was called in to investigate.  Further reports of smoke and flames were increasingly being reported by commuters and even a policeman.

Yet, Hayes did not call the fire brigade.  Instead, he went into the Piccadilly escalators machine room walking past the sprinkler system, to investigate.  Unfortunately, Hayes and the rest of the staff at King's Station had never been trained to use it.  That was because no-one was authorised, because it was controlled by another department.

By this stage, Hayes was nearly overcome by the thick acrid smoke.  The fire was too big to extinguish.

Thankfully, during this time, the policeman decided to contact headquarters and walked up a long staircase outdoors where his radio worked.  Finally, the fire brigade were notified of a "small fire at King's Cross".

Hayes ran back and gave orders to stop the trains and evacuate.

The entry to the Piccadilly escalator was roped off and people were diverted to a different stairway.

In the ticketing hall, thick black smoke started to snake across the ceiling and the escalator's rubber handles being to burn and melt.  The burning rubber emitted an acrid smell that started to concern the rushed commuters.

By this stage the fire was spreading at an alarming rate.  The entire escalator was aflame, fed by a superheated gas that rose up to the ceiling where it was trapped against the tunnel's ceiling of multi-layered paint.

The paint began absorbing the warmth and when each new train arrived, it pushed a fresh gust of oxygen into the station, strengthening the fire like a bellows.

Commuters were still alighting off trains, immediately realising that they'd be sent to a fiery hell with smoke wafting around and a sweaty, acrid heat permeating the platforms.  Frightened commuters tried desperately to get back into their departing train.  But once the doors were sealed they were not allowed to open again.  Despite their screaming, trains set off again leaving commuters behind to face their doom.

Shortly after, a train went through, feeding the raging fire, causing a jet of flames to shoot out from the escalator filling the ticket hall with thick black smoke and intense heat killing or seriously injuring most of the people in the ticket hall.  Known as a flashover point, the superheated gases on the escalator reached combustion temperature, igniting everything in site into a deadly blast.  Within half a second, the temperature of the hall shot up to 150 degrees.

By this stage, around 700 commuter were trapped underneath trying to escape by running onto the train lines.

The blaze was finally extinguished six hours later.  It took longer than normal because all of the station's blueprints were in a locked office where no-one had access to the keys.

So what caused the incident?

The King's Cross fire is one of the best examples of the dangers of a hierarchical management style where workers must be seen, but not heard.

Back in 1987, the London Underground operated by a set of informal rules demanding that every employee do what they were told and only did their particular job.  They were not allowed to question anything.

Station employees were not trained on how to use the sprinkler system.  In fact, they had never even been allowed to see a letter from the depty assistant chief of the London Fire Brigade that complained that staff were not trained in safety matters and needed to immediately call the fire brigade, if they so much as thought there might be a possible fire.

Meanwhile, station employees were warned to not contact the fire brigade, unless absolutely necessary, for fear of panicking commuters.

Normally, each of these informal rules ensured the smooth running of the Underground.  With its 19,000 employees, the trains famously ran on time in a delicate system that saw employees co-operating to ensure the smooth running of trains.  Ticket queues could be dealt with quickly, if the ticketing clerk only processed tickets.

For over forty years, the Underground had been run by "Four Barons' - departmental chiefs that presided over signal, electrical, civil and mechanical engineering.  Within each of these departments was a hierarchical web of bosses and sub-bosses who autocratically guarded their jurisdiction.  No chief ever trespassed onto the territory of another.

In the book, Multipliers by Liz Wiseman, she points out that corporate environments are the perfect setup for diminishing leadership and have an built-in tyranny.  With organisation charts, titles and clear hierarchies, there is no level playing field for all layers of staff.  While policies are put in place to create order, they do have the disadvantage of stopping people from thinking.

As an investigator noted, "The engineering director did not concern himself with whether the operating staff were properly trained in fire safety and evacuation procedures because he considered those matters to be the province of the Operations Directorate."

When it comes to improving safety, the King's Cross tragedy taught us:

After the King's Cross fire and a subsequent investigation, many senior leaders of the Underground resigned.  It also led to improved fire safety regulations.

As Charles Duhigg wrote in The Power of Habit, crises are so valuable that memorable leaders see the opportunities of a crisis to bring about much needed cultural change.  The King's Cross fire is a perfect example of how, through the ashes of a catastrophe, many future lives were saved from addressing big gaps in safety training.

Back when I was a kid in the 1980s, I attended one of my father’s business classes that he taught at a University.  As an awkward 12 year old, in a class of what seemed...