In a wood-panelled conference room in Seattle, a handsome dark-haired man called Nick sits with three people.  They are all working together on a marketing plan for a start-up. It looks like a typical business meeting.  One of possibly thousands that occur in the city each day. Except Nick is not a business man. He’s an actor with a secret mission to sabotage the group’s performance.

He has been planted to portray one of three negative stereotypes: the Jerk (aggressive/negative), the Downer (depressive) and Slacker (no definition required). All in the name of a research study being run by Will Felps from the University of New South Wales.

No matter which character he plays, in almost all of the groups, team members eventually mimic his non-productive behaviours. Either finishing the plan quickly and, at poor quality, or lethargically putting their heads down on their desk with their arms folded.

Across 40 teams, Nick plays the villainous teammate. Almost effortlessly reducing group performance by 30 to 40 percent. No matter which character he plays – the decrease is the same.

Yet, there is one team that doesn’t fall into his web of trickery and deceit. You would probably think they are the smarter group. People that are more experienced, more skilled, or emotionally intelligent.

In actual fact, it boiled down to one participant. Let’s call him Tom. In Tom’s team, despite the odds, his group are not only engaged, but they produce high-quality results.

So what do you think Tom did that changed the effectiveness of the team?

We often associate strong leaders with having certain characteristics. You might think that Tom has ‘the gift of the gab’ able to magically convince his teammates to focus on developing the marketing plan. Or maybe you believe he is a gifted marketer – persuading the team with his great ideas. Or perhaps, you think, he is a born leader, one to whom people are naturally drawn and want to follow.

As Felps articulates in the book, The Culture Code, “Nick would start being a jerk and [Tom] would lean forward, use body language, laugh and smile, never in a contemptuous way, but in a way that takes the danger out of the room and defuses the situation. It doesn’t seem all that different at first. But when you look more closely, it causes some incredible things to happen.”

After examining the video footage of Tom, Felps uncovered a pattern. When Nick acts like a dickhead, Tom defuses the negativity – using a variety of techniques from acting warmly or being curious. He was able to draw each person in individually by asking simple questions such as “Hey, what do you think of this?” or “How would you do that? Then, Tom would actively listen and respond.

All together, these small behaviours, almost unnoticeable to the untrained eye, increased energy levels, openness and team cohesion.

But most important of all is that Tom creates safety for his team. A quality that we don’t (yet) equate with a successful leader.

How to Lead the Team to Success

Thousands of years ago, when humans roamed the African savannah, it was in our best interests to live in tribes. Being part of a tribe allowed us to sleep soundly knowing that others were looking out for man-eating sabre-toothed tigers.

We have become biologically programmed to want to be with people and work together, as we instinctively know it helps our survival. But even though we no longer have to fear being eaten by a wild animal, our brains still scan the environment every 4-5 times a second to make sure we are safe. Except in this modern world, our brain monitors whether we are safe in our team.

As a leader, improving your team’s performance isn’t about giving orders, having the answer to every question, or being the most knowledgeable. It’s actually about ensuring your team feels safe, connected and believe they share a future together.

It all comes down to leaders providing their team with small, consistent behaviours known as belonging cues.

As Daniel Coyle says in his book, The Culture Code, “Belonging cues aren’t to do with character or discipline but with building an environment that answers: Are we connected? Do we share a future? Are we safe?”

The good news is that these signals don’t take much time to deliver, but daily practise creates a huge impact because they create a foundation of trust, which our brains need to propel us to perform at our potential.

In our work, we take those three questions a little bit further to ensure they create a foundation of trust:

Psychological Safety is when we believe we can take risks, make mistakes and we won’t create “a career-limiting” move. While Connection is when we feel liked, valued and appreciated by our team.  It’s when we feel like we belong.  Underpinning both these important dimensions is clarity around a Meaningful Future. This means knowing that the company has a future plan and that we have some sort of career pathway as well.

These three critical factors combine to create four important impacts with the main one being Trust. Consider the impact between Safety and Connection. This gives people the confidence to have truth-seeking conversations about current performance. It fosters Honest Conversations that help an organisation swiftly reach ambitious goals. It requires embracing discomfort and people talking about bad behaviours, errors and bottlenecks.

While at the intersection of Connection and Meaningful Future, provides people with the safety net they need to go that extra mile.  In other words, people both feel, and provide, Support. This is when people know their teammates care about them and have their back.

At the junction between Safety and Meaningful Future you get Accountability. When people know they are free to make mistakes and have clear goals, it improves accountability. Stuff gets done. And in a healthy, non-burnout type of way.

Driving all of these behaviours requires a team leader who interacts with each team member in a way that subtly tells people “we’re all in this together.”  This creates trust, or as I like to define it:

The ability for everyone in an organisation to confidently rely on (and predict) that others will do the right thing and make good on their promises.

Leading Teams – It’s Not about the Words We Use

As someone who has written a book on workplace communication, it pains me to say that leadership is more than just what words we say.  And while communication does play a part in behaviour change, it’s our actions that are far more powerful.  After all, people are more likely to trust us if we match our words to our actions. In other words, if we do what we say we’re going to do.

Observing leaders asking questions, listening to others and taking action on feedback creates safety.  It has a much greater impact on the workforce than words said to inspire but ring hollow with inauthenticity.  What Tom did to build trust with his team was that he didn’t go about taking charge, giving directives and laying out an inspiring vision. Instead, he created the right environment for others to perform, rather than making himself look good.

We think group performance is about verbal intelligence or experience, but it’s incorrect.  How we perform as a team is based on all the subtle, subconscious cues that help our brain believe that we are safe and united.

For team leaders, leading teams involves more than just communication, it involves modelling the right behaviours and using body language to convey safety and connection.  How are you going to build safety in your team?

Over the last two articles, we have covered how to foster psychological safety and create meaning for your team to improve performance.  In the final of... 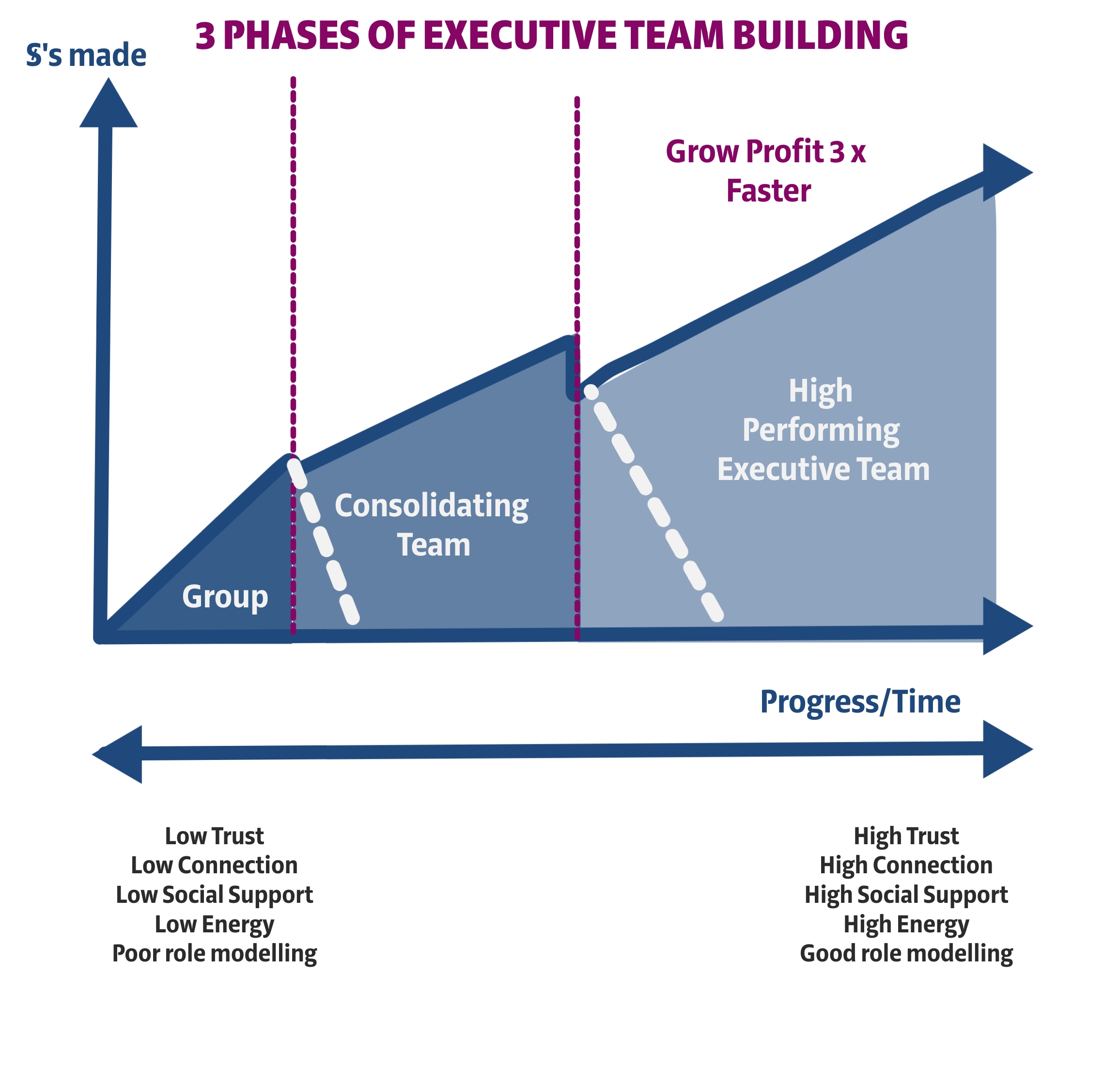 Everything is a product of evolution. Businesses go through cycles and need the right executives working at the right level for the business at that time. This comes...