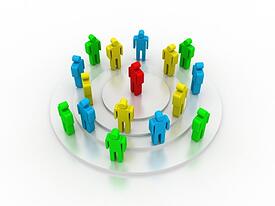 "I assembled this team because I'm a strong believer in strong personalities and strong opinions.  I think that's how the best decisions are made.  One of the dangers in a White House, based on my reading of history is that you get wrapped up in groupthink.  Everybody agrees with everything and there's no discussion and no dissenting views.  So I will be welcoming vigourous debate inside the White House".

Why was Barack Obama concerned about groupthink?

Groupthink Definition is when decision making suffers as a cohesive group becomes insulated from dissenting viewpoints, especially when the group leader promotes a particular solution or course of action.

In the book, Crucial Decisions by Irving Janis, he discussed that work groups tend to do what they can in the interests of group harmony.  This means any dissenting views are not raised, for the fear of ruining group happiness.

However, the price that close-knit groups pay for being cohesive and always in agreement is that often the leader will favour their own views, even when their views are incorrect.

Janis found that numerous examples of poor decision-making in the White House led to unnecessary wars and loss of life, due to the consequences of groupthink.  This was what concerned Obama (and rightly so).

Janis found that there were three main types of symptoms of groupthink:

The major concern with groupthinking in that any organisation is prone to it, but more importantly,it can produce an inability to look at conflicting information and alternate possibilities.
When a leader puts forward an idea and the group refuses to challenge the idea, companies end up making defective decisions.
From a safety perspective, it puts companies on risky ground if their safety meetings show symptoms of groupthink.  It means that potential risks are ignored putting the lives of workers in danger.
How to Avoid Groupthink
Open, cohesive leadership enables good decision-making.
To prevent groupthink and allow best practice for group decisions, recommendations include:

Whenever you have a group of people working together closely, groupthink will always be a potential issue.  It's important to be aware of it and to introduce some of the techniques above to lessen the effect.

If you need a resource to introduce these techniques into your workplace, take a look at our toolbox training DVD, which incorporates elements to reduce groupthink.

One of the things that both chairs and executives tell me with pride is how their leadership team functions so well together.  Interestingly, most of these teams have...