Over the years, I’ve worked with many CEOs across Australia from predominantly midsize companies. Some will complain about their people not being fully productive or trusting others in the organisation. They despair at how their staff gossip and assume the worst-case scenario.

In their minds, these symptoms are frustrating and quite insurmountable (it often gets labeled as “nothing you can do. Just human nature.”) But it becomes pretty apparent to me what the issue is and it is often not what they want to hear.

People don’t know their future at the organisation. And by that I mean on two different levels. The first one is clarity on the big vision for the organisation and where the leader plans to take the organisation. While the second is how each person fits into that and what capabilities are required.

That might sound pretty trite. But if the CEO or a senior departmental leader has not clearly communicated the vision that’s in their head, and how people fit into that, it creates enormous uncertainty and trust issues. The fallout is that people are often unproductive or disengaged because they don’t know what they’re doing or why it matters. And it all has to do with our brains.

In the middle of our brain, there are two old, survival brains that have been with us since our days roaming the African savannah. Known as the limbic and mammalian brains they store our habits and routines, so we don’t have to think about how to walk every time we get up in the morning.

These essential brain hacks help us to do other important things such as check how many followers we received on Instagram overnight or how to seamlessly match our shoes to an outfit.

While our brain does enormous subconscious tasks for us that are mind-boggling (except maybe to the brain), it was primarily designed to keep us safe from danger. Allowing us to switch into fight, fright or flee mode.

Except the trouble is that our world isn’t that dangerous anymore. We don’t have to look out for sabre-tooth tigers ready to eat us for breakfast. But our brain regularly scans the environment asking subconsciously: Is it safe to be myself? Do I belong here? What’s my future with these people? Can I trust these people to look out for me?

When we are stuck in our old brain operating system, we are in an unresourceful state of mind. It is a pretty limited and fearful perspective of what’s possible for us. We work on the wrong tasks, solve non-existent problems or get stuck and don’t know what to do.

Ideally, we are primarily operating from our prefrontal context. This is a newer part of the brain that enables us to see the big vision and work out the steps to get there. It’s where we feel we have choice and can make decisions based on a more positive and expansive outlook.

And that’s what we crave as human beings. We want our leaders to clearly articulate the strategic roadmap. It makes us feel excited, inspired and that our work has meaning. All of a sudden all the pesky little people problems fall away because everyone is focused on the big picture.

As Jack Stack says in the book, The Great Game of Business, “If you want to make things happen, get people to raise their sights not lower them. The broader the picture you give people, the fewer the obstacles they’ll see. People need big goals, then they will blow through little obstacles. But those issues will become mountains if you don’t get people beyond day-to-day decisions.”

All it involves is a leader that creates the right environment where everyone feels safe, connected and believe they share a future together. And it’s the future factor that I want to cover in this article.

3 Steps for Leaders to Define the Future

There is an activity I undertake with leaders where they have to envision the future they want for their team. That means imagining what a high performance team would look and feel like. For some, it is team members sorting out petty conflicts or problems by themselves without the CEO. For others, it is a team working harmoniously together where they would do anything for each other. While for other leaders, it is a team that communicates clearly, makes decisions fast and takes action with no stuffing around.

For some leaders, envisioning an idyllic future is a tough task. We often feel that we can’t create the future that we want. That we have to put up with frustrating behaviours because “that’s how people are.”

But we don’t have to put up with it. In fact, when we get really clear on the behaviours we want, communicate them clearly and reward the right behaviours (and pull up toxic ones), it creates a healthy team culture. One that is modelled by others in the business. After all, senior leadership team interactions are amplified across the business. They create organisational culture whether you like it to or not.

It requires seeing the present more clearly so you can intentionally create the future you want. And we need to do this in two areas – the organisational vision and future modes of behaving and interacting. This is so powerful because it leverages what is known as gap theory.

Curiosity happens when we have a gap in knowledge. So when there is a void between where we are and where we need to get to, our brain is driven to close that gap. It creates tension that drives us to keep searching to find the answer and get closure. It’s like doing a jigsaw puzzle. We keep working on putting all the little pieces together, so that we can see how they interrelate to create the big picture.

As Daniel Coyle says in the book, The Culture Code, leaders need to provide two simple locators that every navigation process requires: here is where we are and here is where we want to go. Communicating the purpose or vision isn’t about tapping into a transcendent realm. Instead, it produces readily identifiable beacons that focus attention and engagement on the journey ahead. It works through connecting the present effort to a meaningful future.

It is also really motivating for people because it provides clarity around where they need to get to work because they now understand what is most crucial to shift.

And there is a remarkably powerful process to link the future with present reality. It is a bit like providing every employee with a treasure map that has “X” marks the spot of what you are aiming for combined with a shopping centre map that say “You are Here.” Except you don’t give step-by-step instructions to people on how to get the treasure. The power lies in giving people the ability to make the decisions on how to get there. Of course, it might be helpful to give them the first landmark so you can provide guidance, but then you let them figure it out. 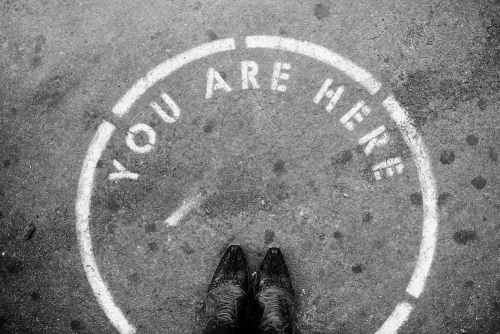 Photo by Fallon Michael on Unsplash

So how does a CEO or team leader make this work?

The first foundational step involves working out two things. The future ideal and the best behaviours for the organisation to get there (eg: sharing information, critical thinking). You can also include skills and capabilities with behaviours, as a lot of employees like to understand what future capabilities they will need to remain in the organisation.

The good news is that when you can imagine a better future and get excited by it, you easily bring other people onboard, who are naturally drawn to it. The more descriptive you can be and the more you can feel it, the easier it will be to communicate it. It attracts and engages people forward because they’re now operating in the resourceful prefrontal cortex. This is critical because what successful companies do is relentlessly tell their story in a variety of ways.

To introduce the ideal future to your people you need to almost draw it out like you’re talking about a map in two steps:

1. Here’s where we’re at (here’s what you know) – What the company has achieved, how people work together, what capabilities people have and the impact this has on customers. Then, to encourage people to accept the new change talk about why what they’re doing now isn’t working. The more intense, the better.

2. Here’s where we want to go (here’s what you’re missing) – The future goal and how it will make customer lives better. It’s painting a picture of what success looks like and future capabilities, so people can determine whether they they have the right skills and mindset.  It even means discussing the potential obstacles and pitfalls. After all, there is never a smooth and easy journey to a future goal. Honestly discussing the risks and the negative experiences on the road keeps it real. It also makes people more likely to not only expect derailments only the way, but to be more open to solving them.

Amy Edmondson, a Harvard Business School Professor, says it’s about framing work as learning problems rather than execution problems. This requires being clear about uncertainty and how everyone’s input matters: “We’ve never been here before, we can’t know what will happen, we’ve got to have everybody’s voices and heads in the game.”

It’s a myth that successful leaders provide the strategic vision, give directions, and take charge. Instead, to lead and manage team effectiveness requires creating the right conditions for people to perform. Leaders rise up to show how accepting the present challenge will actually shape a better tomorrow.

This requires telling narratives that take people on a journey from present to future state. This process cascades abstract visions into more conceptual information that helps all employees from top to bottom more readily identify what needs to be done. Encouraging action and importantly, caring about the outcome.  And it stops all those pesky people problems because people know where they’re going and what they’re doing.

And isn’t that what true leadership is about? Inspiring people with a future where there are rewards, new behaviours and processes. This pulls people in rather than pushing people into distrust.  And when you do that the future is certain.

trust consistency how to build trust with employees