INCREASE TOP TEAM EFFECTIVENESS BY UP TO 2-3 TIMES

Discover how to improve team cohesion in dispersed teams. This includes:

THE IMPORTANCE OF TEAM COHESION

1. WHAT MAKES A GREAT LEADERSHIP TEAM?

Today’s fast-changing world features speed, complexity and dense interdependencies. The ability to problem solve and adapt in real time is critical, in order to advance an organisation forward. At its core, this requires an energetic leadership team that are incredibly focused on delivering the right customer outcomes. Uniting together, as a harmonised collective – prioritising, communicating and co-ordinating work in alignment with a clear vision.

Research by global consulting firm McKinsey uncovered that 90 percent of investors believe the quality of the management team is the single most important non-financial factor when evaluating an IPO. They discovered a 1.9 times increased likelihood of having above-median financial performance when the top team is working together toward a common vision¹.

Essentially, there are three important areas for senior leadership teams to master: 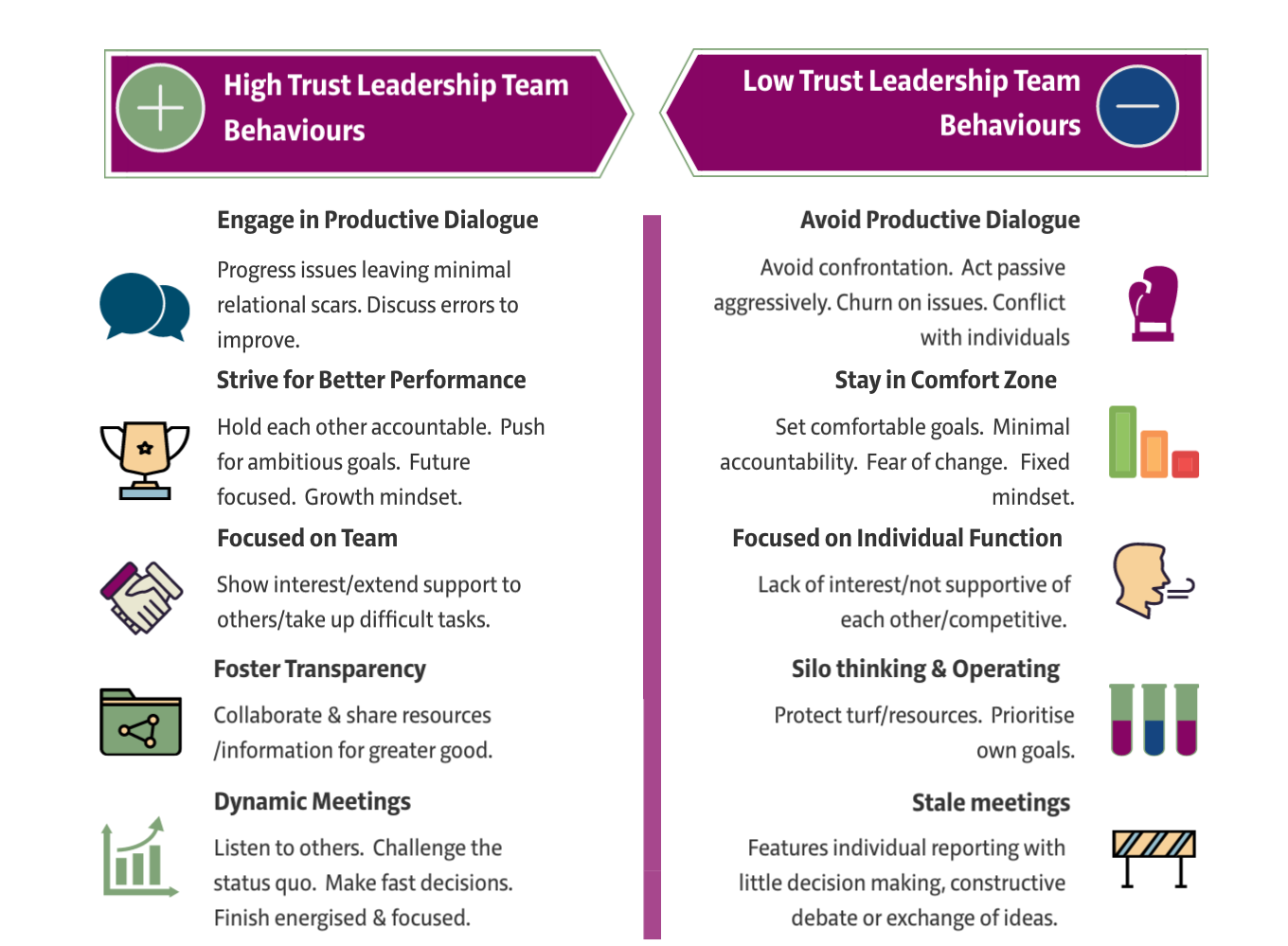 Positive leadership team behaviours make it easier for all employees to do their jobs. Employees regularly check alignment in the leadership team based on whether executives know what their peers are working on, if they consider and include them in decisions and if they promote the same messages.

Underpinning these team behaviours, requires each leader to operate with integrity, be accountable and assume positive intent by their peers.  The truth is the less likely the team behaves in these ways, the less people trust them. Creating disengagement between staff and the leadership team.

As Gary Allen, the CEO of a large company said, “Worst case is employees might look at a leadership team and think they’re in it for themselves.  They're dysfunctional and not doing their job.

They're not considering employee’s future as the organisation's workforce. Generating negativity about that leadership team.”

A strong leadership team both looks and feels different to a poor one. Many CEOs waxed lyrical about how good it felt to be in a high performance team.

Here’s what I believe the path to improving both psychological safety and accountability looks like. It’s like moving up a ladder. As you move up the rungs, performance and accountability improves. At the same time, while team productivity progresses, leader effort starts to decrease. That's because they have learnt how to delegate and lead their team in such a way, that team members put in the right energy and commitment.

In fact, down at the first rung it takes far more leadership effort to get the team to produce mediocre work. Here the ratio of leader effort to team impact is (10:1) which is ten times the leader effort required at the top rung (1:5).

Encouraging teams into the Achievement Zone requires a positive leader who ensures there is high trust, not just within the team, but across teams and with everyone they work with. In other words, a trust guardian who holds everyone to high standards of behaving and performing.

Staying in this zone can be difficult. In my work with leaders, those who model curiousity and stay open to exploring new ideas create the excitement needed to stay on course. The result is productivity that is five times the rate of average teams, but the performance is sustainable and doesn't burn people out like in the Anxiety Zone.

The biggest problem in the Anxiety Zone is individual effort is rewarded, rather than group effort. This creates an environment that is competitive and unsupportive. It requires a leader to come in and change behaviours through the regular repetition of emphasising the importance of teamwork. Not only that, the leader must learn how to extend trust to those around him, as often trust issues are because of their own behaviours. This actually decelerates progress because people hold back commitment to goals because they don’t trust their boss or the situation.

Leading out of this zone requires a significant mindset shift because as the team is already performing at a high level there is little incentive for improvement. Often, leaders in this zone will boast about their team's progress and that trust with each other is high. However, scratch the surface and the work environment is characterised by subpar work that goes under the radar and high employee relations and turnover costs.

In the Abatement Zone, performance is waning, but it can be slow to show up because often this team is riding on the success of a previous victory. It requires a leader honest enough to realise that they need to not only push themselves a bit more, but their team.

This really is a tipping point to moving into better performance that is dependent on the team leader having those dreaded performance conversations. At its core, this requires leaders to energise performance through explaining the benefits of improving.

This is critical because the team is often producing mediocre output, that is pulling down the performance of the organisation.

Finally, the Apathy Zone requires even more time and dedication to not only increase morale in the team, but to improve the standards of work. That is why productivity can be negative in this zone because other teams have to work around them – either duplicating or redoing their work.

Typically, emotionally unstable leaders or toxic employees are the root the cause of teams falling into this danger zone.

Often, restructuring the team or placing an emotionally intelligent leader in charge is required. These teams demand a leader willing to empower team members through providing autonomy where team members start to make small decisions and work on their own projects. It requires a leader who believes in each direct report, reassures them of their abilities and commends them on their improvements. 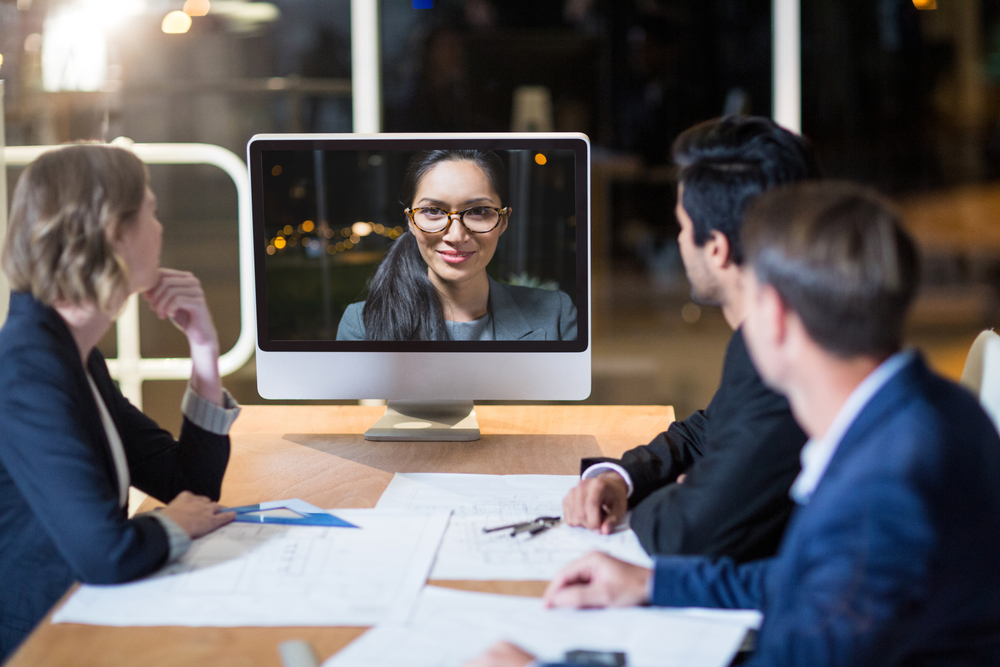 Teams move up into the Achievement Zone when the leader sends signals that “we’re in this together.” Central to this concept is that the leader communicates one powerful ideal – we are safe, connected and have a shared future together.

Every single moment our brains are scanning our environment and calculating whether we can trust the people around us.

At work, we need to feel confident that speaking up or making a mistake isn’t going to be a career-limiting move. Our brain asks regularly– Am I safe to be myself? Do I belong to this team? Do we share a meaningful future together?

When these questions are answered affirmatively, it produces trust and psychological safety enabling us to operate at a more sophisticated level.

In contrast, when we don’t subconsciously receive these assurances from the team leader, we hold back our opinions, information and working with others.

Likewise, when we don’t know what’s going to happen next, the situation feels unsafe and people push back from committing to goals. The way to avoid this is for the leader to involve people in a meaningful future. It pulls them into engagement and out of the low performance zone in the brain.

At its core, this requires a leader who is skilled at building trust in an authentic manner. Not just through communication, but through subtle and consistent belonging cues. In other words, A leader who has honest conversations, drives accountability and supports their people.

The more people trust their leader, and each other, the more they will take risks and adapt ensuring steady progress of the firm.

To help legal team leaders move up the team cohesion capability ladder, I have designed an interactive and engaging online facilitation and coaching program.

Building Cohesive Teams has been created specifically to support legal team leaders with effective techniques to build trust both within and across teams.

It makes it easy for leaders to improve trust, cohesion and employee wellbeing outcomes saving 30 minutes a day.

This program will equip your leaders to more efficiently get teams out of the Anxiety Zone into the Achievement Zone that has both high accountability and psychological safety. Resulting in more team impact, but less effort by the team leader.

Team leaders are provided with tips and tools to support them in optimising team performance.

The cost for all of these deliverables is $5,000 plus GST. It can also be customised.